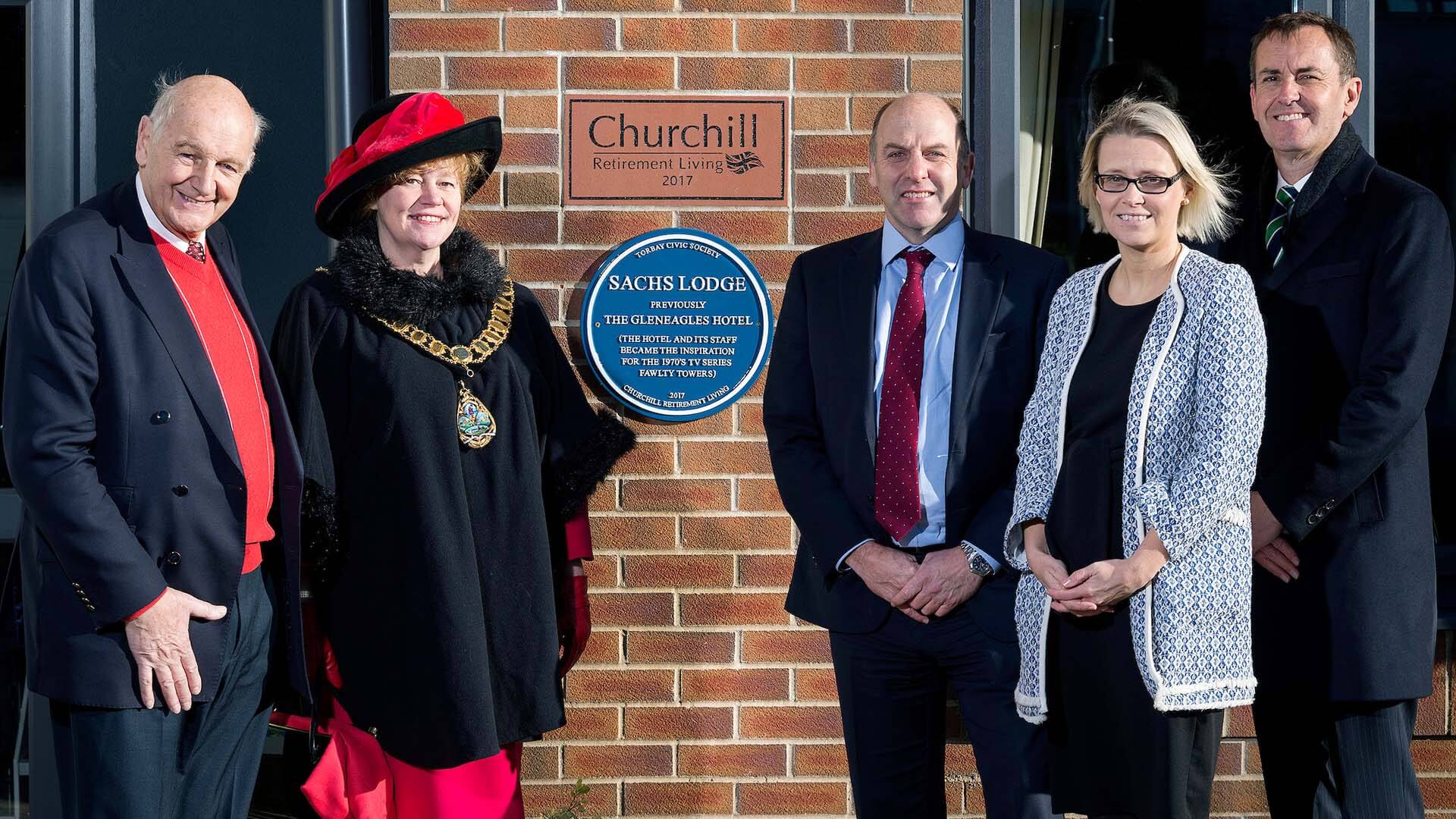 Churchill Retirement Living’s Sachs Lodge in Torquay has officially been awarded a Blue Plaque by the Torbay Civic Society. The development is built on the former site of The Gleneagles Hotel, which became the inspiration for the well-known sitcom ‘Fawlty Towers’.

The development itself is named Sachs Lodge in memory of the late Andrew Sachs, fondly remembered by many for his role as Manuel in the sitcom and who passed away in 2016.

Ian Handford, from Torbay Civic Society commented: “The Gleneagles Hotel was visited by the crew of the Monty Python Flying Circus Show and inspired John Cleese and Connie Booth to write the classic sitcom ‘Fawlty Towers’.  Although only twelve programmes were televised, the series was voted top in the British Film Institute’s 100 Great British Programmes list in 2000.

“Over the years numerous extensions were made to the hotel until it closed in 2015. The building itself had no historical merit and the Torbay Civic Society were pleased to support Churchill’s plans to build much needed retirement apartments.  We are delighted to reflect the ‘Fawlty Towers’ history with a new Blue Plaque to honour the hotel and its staff.”

James Barnes, Regional Managing Director for Churchill Retirement Living added: “We are thrilled to receive this Blue Plaque to mark the history of Sachs Lodge. ‘Fawlty Towers’ was an iconic British comedy and this is a fitting tribute to The Gleneagles Hotel which played such an important role in its inception.”

Sachs Lodge is a collection of 33 one and two bedroom privately owned retirement apartments and shared facilities, designed exclusively for the over 60s. Located on Asheldon Road, the development enjoys views across the dramatic Lyme Bay and is also within a short walk of Ilsham Green a grassy expanse leading straight down to the sea and part of the South West Coast Foot Path.

Offering quality retirement accommodation and safe and independent living, the development is in a convenient location close to local shops and amenities. Apartments boast spacious rooms throughout and are an ideal combination of design and functionality. The fully fitted, stylish kitchens include a built in fridge and freezer, hob and an oven, which is located at an easy-reach height. All of the properties benefit from illuminated light switches for added convenience. Owners also enjoy ultimate peace of mind from a fitted camera entry system for the highest level of security and a 24 hour emergency call system.

With less to worry about, Owners will have more time to do the things they enjoy, including taking advantage of the host of other benefits on offer, including having family or friends to stay in the development’s well-appointed Guest Suite, enjoying a chat with neighbours at the coffee bar, or attending one of the many events in the spacious Owners’ Lounge. They can also enjoy relaxing in the mature landscaped gardens complete with a secluded suntrap patio.

Sachs Lodge overlooks the sea at Lyme Bay and Anstey’s Cove beach sits below the end of the garden, just half a mile walk via the South West Coastal Path. Anstey’s Cove Beach is quiet, peaceful and a great beach to come to escape the crowds. The development is well-located for the desirable Wellswood Village, which has an excellent selection of local shops and amenities including a Post Office, a patisserie, a pharmacy, a wine bar and deli, beauticians and hairdressers.

The marina, seafront and town centre are just a short distance away for shopping and entertainment. There are a number of award-winning restaurants and gastro-pubs as well as the exclusive department store Hoopers, which offers four floors of fashion and lifestyle ranges.