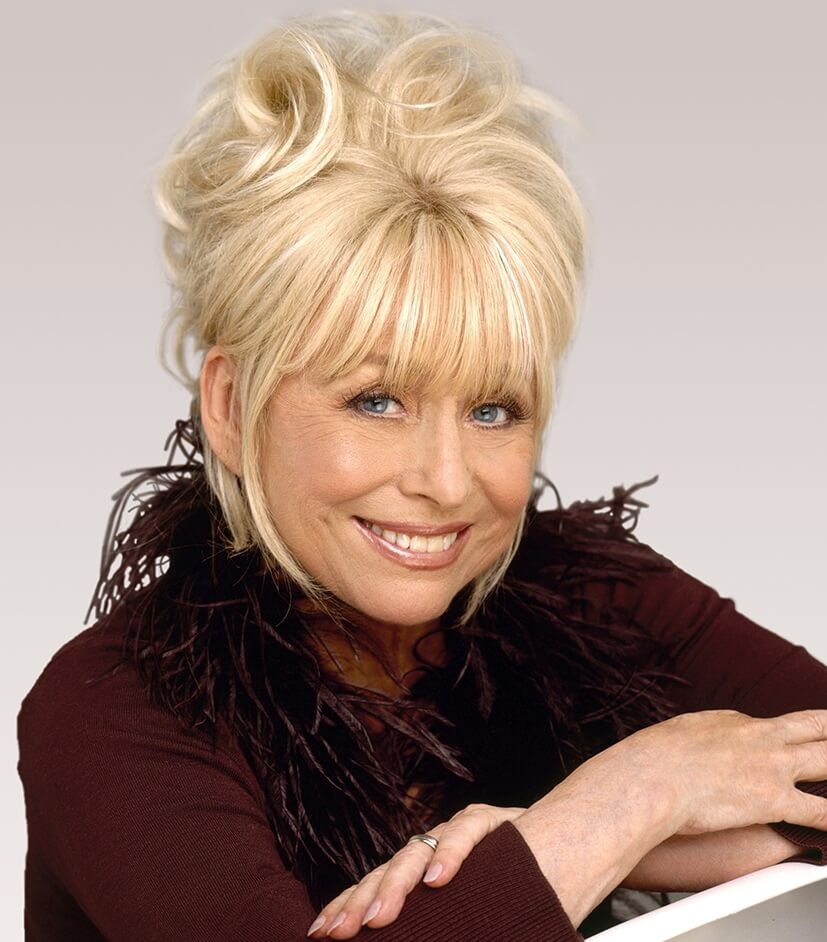 There are few people who are real national treasures, but Dame Barbara Windsor DBE is one of them.

The star of EastEnders and the Carry On films turns 80 this year and with a career which has spanned several decades, Dame Barbara Windsor is almost as recognisable and as loved as the Queen.

Dame Barbara was in her fifties when she landed the coveted role of feisty Peggy Mitchell, the landlady of the Queen Vic in EastEnders in 1994.

She made the role her own and not only went on to play the formidable matriarch for the next 20 years, but set a benchmark for achievement in ‘the third age’.

“I take my work very seriously, which always surprises people as I am not like my image,” says the TV star.

Peggy Mitchell was a world away from the bubbly, platinum blondes Barbara played in the Carry On films in her youth. The saucy British comedies, which featured household names such as Sid James and Kenneth Williams, made the young ‘Babs’ a household name, although this later came at a price.

“The casting directors and people in the industry were still seeing the (Carry On) films on TV and thought of me as that sexy young blonde again, when in fact I was in my 50s and work had slowed right down,” said Dame Barbara.

However, her fame and talent was seized upon by EastEnders’ producers and, at a time when many actresses would expect to slow down, Barbara became busier than ever and a mainstay of the soap opera. Her catchphrase, ‘get outta my pub’ has become almost as well-known as she is.

“It was actually EastEnders that gave me the chance to play my age and do some dramatic acting, and that changed everything for me,” says the soap legend. “I will be eternally grateful to the BBC for giving me that chance. When all is said and done, I am immensely proud to be a part of two great British institutions, the Carry On films and EastEnders.”

Though Dame Barbara has now left the show, (her last broadcast appearance was in May 2016), her place in the hall of fame has been assured; so much so that the BBC made a biopic of her early life, BABS, which aired earlier this year.

“Actually seeing it played back in front of me and reliving such powerful memories and things that had happened in my life, was truly overwhelming,” says the actress.

Dame Barbara first started acting when she was just 13, when she was evacuated from London’s East End to Blackpool during WW2 to escape the bombing. The family she was living with sent her to dancing school and Barbara took to it “like a duck to water”. On her return to London she was given a note for her mother which read: “Babs is a natural show off and please make sure she continues her singing and dancing lessons.”

“And that’s where it all began,” she says.

It was the beginning of a long and colourful career. Dame Barbara worked with the brilliant director Joan Littlewood of Stratford East Theatre Workshop, who cast and directed her in the musical comedy, “Fings Ain’t Wot They Used To Be”.

“We clashed at first, as I hated the way she worked, but Joan pushed me and always said I was capable of being a fine actress and more than the sexy little blonde I ended up being cast as later in my career. I have a lot to thank this incredible lady for,” says Dame Barbara.

“Fings” transferred to the Garrick Theatre in London’s West End and the composer Lionel Bart (who created ‘Oliver’) wrote the blonde bombshell a solo number in the show. “It got a standing ovation every night,” she says. The show ran for two years and Dame Barbara became established as “a recognisable name and face,” she says.

Dame Barbara’s success has earned her many awards and honours, culminating in a Damehood last year for services both to entertainment and charity. “That’s a hard one to beat. It’s lovely to be recognised for something you have done and loved doing all your life,” she says.

Her charitable work has been extensive and she has worked with Age Concern, Age UK and Variety, the Children’s Charity, amongst many others. In 2016 she also won a Churchill Award for charity. “I was very honoured and attended the most wonderful lunch and met some great people.”

These days, the star still accepts the occasional part, though she is quite selective in what she does. ”In general I think that the longer you can keep working the better, as it keeps the mind engaged,” says Dame Barbara.

One of her regular jobs “which I love doing”, she says, is presenting Radio 2’s ‘Barbara Windsor Celebrates’ about famous show-business personalities. There is “no need for make up or worrying if the audience has turned up and that suits me fine right now,” she says. “Without sounding big headed I have done everything I wanted to do in my career, so it’s nice to feel relaxed about it all now.”

Still blonde and bubbly, she lives with her third husband, former actor and now theatrical agent, Scott Mitchell. (Barbara’s previous two husbands were small time gangster Ronnie Knight and chef Stephen Hollings). The couple have been together over twenty years and when they are not spotted strolling through central London or relaxing on a Caribbean beach, they can often be seen in the West End, enjoying a show.

“I love the theatre. There is nothing better than being taken on a journey and forgetting the outside world for a while,” says Dame Barbara who admits she’s also still a big fan of the soaps and “I do like the talent shows like Britain’s Got Talent and The X Factor. There are also incredible dramas to watch on all the channels now,” she says. “But I guess I am happiest watching an old John Wayne cowboy film or old Hollywood musical. They don’t make them like that anymore.” They certainly don’t.